The Autumn Classic, 26 & 27th April, firstly let me say thank you to everyone who turned out for the 2 days, especially to those drivers who were able to help us out. We actually had a larger turnout than expected which is good BUT it would be helpful if people could let me know if they’ve changed their email addresses or even if they don’t receive any notices about upcoming race meetings that they know about.

We all had to attend the Officials Briefing given by Mike Holloway the acting Clerk of Course. Mike is from Victoria and the CoC at Phillip Island, I understand he will be the Assistant CoC over here for the V8s and this was a bit of a scouting mission to get the lay of the land and let us Officials know how he wanted the meeting to be run. We also had a run through of the new digital radio system and yes it is better than the old one and the headsets are better too. No buddy system so the communicator has to communicate to their offsider!!!

Saturday was a good day for racing, no major incidents… the usual off’s into sand traps but good fast and clean racing. The Saloon boys behaved themselves and the HQ’s gave us some close races. I had expected that Paul Stubber in his Camaro would give us some serious action but it wasn’t to be as unfortunately he had mechanical problems. Likewise, Steve Cherry in the Toyota Starlet was unable to give the cars best performance here since last year, again due to mechanical problems… that car is seriously quick when it’s going well.

The Historic categories were closely contested but again due to mechanical problems, Mike Henderson wasn’t able to compete but apart from a little hiccup at the start, the rest ran well. The Regularity events were evenly spaced around the track and although NOT races, it seems some drivers do need reminding of this!!!

Sunday was a different matter all together, practice/qualifying found some of the open wheelers and Sedans making light to heavy to write-off contact with the safety walls at various places around the circuit and fortunately I think pride was hurt more that body and the cars can always be fixed.

All the Formula Fords and Vees races were closely contested up the front with the rest of the field having their own battles. The IPC, Historic Touring cars had a few drop-outs due to mechanical problems but generally were fast and furious. The Super GT class saw a reduced field with less Porches out than was expected but still a fabulous sight to see that expensive machinery on track here in WA and with drivers with International experience giving us their time.

For once we actually had a good spectating crowd which is always a bonus… hopefully they will spread the word that we have a great facility, that is continually being upgraded, exciting racing, unusual and exotic race cars and a fun atmosphere.

The only sour note is that as Flag Marshals we have to be aware of what is going on track side and Mike Holloway pointed out to us at the Sunday briefing that we had missed 3 out of 4 rules infringements, overtaking under yellows, however we more than made up for this on Sunday with just about every flag point having to complete multiple incident reports… so many that some points actually ran out of the forms!!!!!

Well that’s it from me for this month, see you all at the V8’s 16-18th May when we will have some drivers with us as well as Flag points 1, 9, 10 and 11 being invaded by the participants in the CAMS Young Officials programme, we will have to explain to the what we do, how and why and hopefully encourage them to sign on and join us track side. 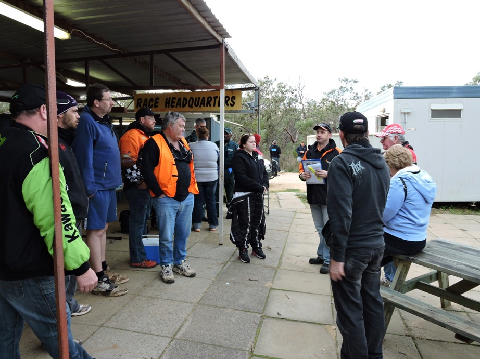