A massive thank you to all WFMA Flaggies and all officials for your efforts during the Pirtek Perth Supernight. It was challenging, exciting and so much more all at the same time.
I was particularly impressed with our newest officials and with the YO program. Great job to all involved – Dani

What a weekend of motorsport at Barbagallo Raceway! Firstly, a huge congratulations to WA Sporting Car Club for an amazing event very worthy of the 50th anniversary of the track. The new surface sounds like it’s a winner for everyone, with lap records falling everywhere so it will be very interesting to see how far they fall in the coming months as the track starts gripping up more. The facilities, surrounds and track look absolutely amazing. There was a ton of work done over the off-season and it certainly paid off. Well done to the Committee and staff, it definitely didn’t go unnoticed.

Next to the drivers, many of you certainly kept the officials busy but well done on driving hard and providing fantastic entertainment for the crowd that came in over the two days. Thank you to everyone who competed over the two days across all the classes, HQ Racing WA, Saloon Car Racing WA, Formula Vee Western Australia, Formula Classic WA, WA Formula Ford, Aus F1000, WA Excel Cup, Improved Production Racing Association of WA, Street Car Racing Association of WA, Sports Cars, Sports Sedans, Historic Touring Cars and Time Challenge. Hopefully no one has been forgotten!

Last but definitely not least, the officials. You guys and gals, thank you!!!!!! 👍🏻👍🏻👍🏻👍🏻👍🏻 Holy smokes, weren’t you all tested over the two days and you all got the job done! There were a number of oil clean ups, cars going where they shouldn’t, Saturday’s very windy conditions being very testing, Sunday’s hot weather making life very trying for everyone, officials and drivers alike, but the amazing group of officials banded together and got on with getting every event run (and it was a hugely ambitious schedule for the two days!!!!). Congratulations to each and every official for their part in making this weekend the success it was.

So starts the 2019 race season and, if this weekend is just the start, it’s going to be a great year of circuit racing!

Another Vintage Sports Car Club of WA Coalfields 500 event is done and dusted and what a weekend of Motorsport. Competitors certainly kept the Officials on their toes, from track clean ups to a high number of cars that had no go-go left in them.

Huge thank you to Saloon Car Racing WA, Formula Classic WA, Formula Vee Western Australia and HTCC for their ongoing support of VSCC events. I hope you all had a great event.

Officials, another great job with a ton of clean ups, a couple of bonus oil spills, and a load of recoveries. It certainly kept us all busy for two days. Thank you for another awesome weekend.

Hopefully catch everyone at the IPC Nationals event in around two and a half weeks.

So another Supercars weekend is over in Perth and what a massive weekend of motor sport in WA. I think the dust has settled and hopefully everyone is heading into their second night of rest and recovery.

But the best part of it all? Proud of the team, as a whole, as a group. Everyone stuck by each other. Everyone backed each other. And THAT is why each and every flag marshal this weekend made it an absolute pleasure to represent them as Chief Flag Marshal. So thank you.

Thank you for your dedication.

Thank you for your commitment.

Thank you for your time.

Thank you for your trust.

Thank you for your contribution to our sport.

Thank you for your passion.

Thank you for being you.

Massive thank you to all the officials for yesterday. It pretty much never got warm, was wet at the start, was freezing cold at the end, but you all hung in there and did an amazing job. There were certainly a ton of incidents to keep us all busy for the day.

Next event on the WFMA calendar is the Vintage Sports Car Club of WA‘s Northam Motor Sport Festival, which incorporates the Northam Flying 50. 1-2 April, come on down for a fun filled weekend!

Til next time at the track!

Hi everyone, please see your emails for details on our AGM, to be held at 11am Sunday the 15th of January at McCracken House, Barbagallo Raceway. This will be followed by a BBQ and drinks, please let us know ASAP if you will be attending. If you wish to nominate committee positions or proxies and didn’t receive our email please contact us (nomination form must be returned to us by 8th January in line with the Constitution). Of course only financial members/Young Officials may vote. Also see the downloads page for the 2017 membership forms.

Please see on the website calendar to the right, the dates for 2017 events that we have received so far.

For more information about us or if you would like our services (not just as Flag Marshal’s but any Officials positions), please click on a heading above or contact us.

I must congratulate each and every flag marshal for a fantastic Saturday of flagging.  There was a lot thrown at us on the day, between cars trying to drive each other off the track, some cars successfully driving themselves off the track, Tracksa system failing, CCTV being semi-manned to unmanned for a good portion of the day, track clearances thrown in for good measure, incident reports coming out of our ears… It was all so much fun! And you all did yourselves proud. A pat on the back for all of you. We were very short on numbers but everyone on the day worked as a great team. Well done! 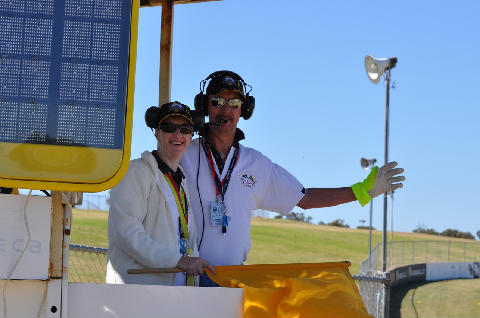