Down to Collie for a VSCC weekend of Hill climb, Regularity and Race events!!!! Met up with Dani early Saturday morning (I didn’t want to take the old Lancer all the way down there… just in case) and arrived at the circuit at 10.13 after a Macca’s breakfast only 13 minutes late. Mind you originally we were told 11.30 then 11.00 and then 10.00 so we didn’t do too badly. The Hill Climb was still in progress but running ½ late so nothing was sorted at the track, but we got going eventually by 12.00!!! Saturday events were a bit hairy for me at FP3, having the action with 2 Classic racing cars stalled on the exit of the corner facing the wrong way in the middle of the track… could have been interesting, but all disasters were averted. Do I need to say that Classic racing car drivers are not necessarily my favourite people? After a wet Saturday night and arriving at the circuit to find large puddles at strategic points, on Sunday we had double the amount of races and regularity events to get through (38 in all) so the grid man was pushing them out as fast as possible with only the occasional annoying drivers breaking down on circuit and requiring a tow to hold up proceedings. The track dried out eventually and the weather managed to hold off until after things had finished with nearly all drivers rushing to get away. All in all a good weekend with some large, medium and small fields but it was still good to watch. Just for a change Jimmy T at FP5 had all the excitement at the last corner on Sunday, not that he would have really wanted it and generally things ran as smoothly as can be expected.

Thanks to Pete and also Gillie for the new photos… lets have more please. Pete and Tyler did the Hill Climb officiating on Saturday so I have no idea how the “Come & Try Day” went. Pete says they had great fun on Jack’s Hill with Tyler being starter and Pete Finisher… good on ’em.

We held the WFMA BBQ at Whiteman Park yesterday and the day started off windy and cloudy but turned into a warm sunny afternoon. Your committee was there to welcome the few hardy members who were not put off by the previous day’s downpours and it turned into a very sociable event.

Nathan and Doug took us over to the Rail station and round the sheds and gave us a very informative tour, lots of work in progress preserving some of the older steam engines and carriages and wagons as well as the diesels. We were all entertained by Dani’s 2 children who insisted on collecting lumps of coal to take home with them and as you can imagine both were soon covered in black coal dust.

In all an very enjoyable day out for everyone with lots of interesting stories and I’m looking forward to a repeat in the future.

Today was the Pre-Race Meeting Tuning day, and I wish I could have stayed in bed. It was cold, wet and windy, Lake Barbagallo was up and down like the proverbial ——- ——— as each successive shower hit the circuit. We started on time with 9 Street cars, 2 open wheelers and 2 Logbook cars altho’ this did increase over the day as more log book cars arrived… only to be left on their trailers, turned around and on their way home by midday!!! Ducky seemed to be the only one enjoying himself as he did a number of driver training/assessment sessions, notable among which was one Scooby driver who Ducky must have been teaching the art of spinning in the middle of Turns 1 and 7 without beaching the car in the sand. In general there were no major dramas, Dozer had to tow in a novice Ute “driver” who had run out of fuel (!!!) one Saloon car driver who must have thought the sun was out as he wanted to play in the sand in T6 and an Audi RS4 driver who just made it back to Pit Lane before coughing out of fuel… another novice.

I am trying to get the WASCC to get drivers who are towed for running out of fuel, to make a donation to the Officials of the Day… ain’t gonna happen!!!!!

Looking forward to our BBQ at Whiteman Park tomorrow and hoping the weather improves and then we have next weekend’s Regularity and Race Meeting… See You There. 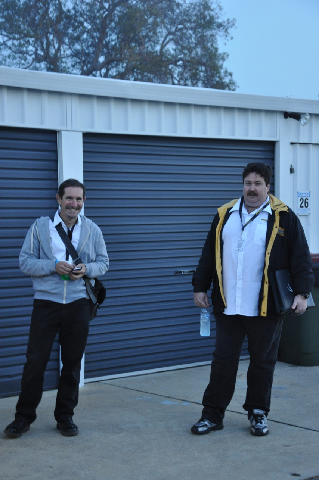