What a weekend, totally knackered!!! Had the bikes on Friday, unfortunately Tyler couldn’t make it but Ivan was there to fill in, a good day with only one real problem, nearly stayed for the Drift practice but they were taking a while to get set so came away.

Saturday, thanks Pete and Tyler for doing the tuning day, Danni and I were there in support. WASCC now has a Tuning Day Schedule for the drivers so they know what order they will be on track and approximately what time, all run efficiently from up in race control. Then the night-time Triumph Car Club meeting, run on the lines of a Super Sprint. Some seriously fast TR8’s and Triumph 2000’s with the little Standard putting on a good performance. Some drivers tended to rely on their 4 wheel drive to get them out of trouble, but still ending in the sand…..on the last corner on the slow down lap ????? Many thanks to Doug, Nathan, Pete and Tyler, I think we all enjoyed the BBQ at the change from Short to Long circuit. A cold night but entertaining with it.

Sunday…a day of rest, well replacing car windows…again !!! but then Mark Webber drove a brilliant race to come second in the British Grand Prix, even if he did have a bit of a struggle to get away from the line.

Next weekend’s meeting is Race and Regularity on both Saturday and Sunday and as the Improved Production are included (don’t forget they have a Championship to compete in and haven’t been out since April) then I reckon we are in for an exciting couple of days with some seriously good racing. That Official’s breakfast is looking better and better.

There are a load more pics in our Photo Gallery, taken for us by Boots and Gillie, at the V8’s and last race meeting, I’ll put a variety up just to make it something a little different.

Well that was the June Winter Meeting and I think everyone had a bit of action during the day. Fun and games with the Formula Fords having numerous incidents all day and then the HQ’s having a come together at FP4 which all made for good racing and entertainment.

The Formula Classic race was a bit of a procession with Mike Henderson winning 3 out of 3 and the Sedan Super Cup races proving that Ferrari drivers do it to the metal. Its a pity Ash Barnett had mechanical problems in Race 1 cos starting at the rear in Race 2 provided some great racing as he managed to get up to the podium by the chequered flag.

Saloons gave us some interesting ways of overtaking and how to end in the sand-trap and proved an exciting category.

All in all a good day’s racing and enjoyable for one and all.

Gave Colin a peaceful day as my lack of voice meant Toni manned the radio all day (look out next month). Well done Julie for manning her flag point alone, hope John’s back next month. Tracey had FP7 under control and Danni proved FP’s 10 and 1 were magnets for incidents for her…..hmmmm, Glenn, Des, Andrew, Kim and Ian had trainees and/or drivers with them so they had an educational day. Congrats and thank you to everyone and apologies if I’ve forgotten anyone.

Watch this space for news, views (mine) and opinions (also mine) !!! 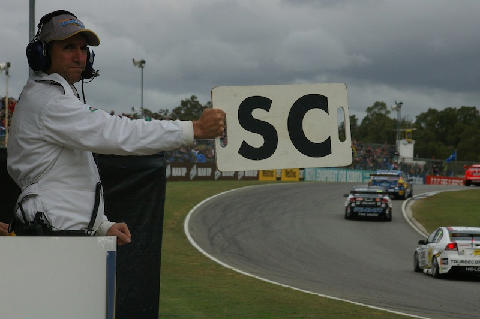