So that was the last race meeting of 2013, The Wanneroo 300. It was a long and tiring day for all of us and a big thanks has to go out to Aiden, Bruce and Dan for coming to our assistance and flagging and of course to our staunch team of regulars who always turn out.

The day’s events started off in spectacular fashion with the salon drivers going all out in practice and qualifying and then the drivers for the 300 coming out and really putting on a show. I got the impression that drivers and co-drivers were each trying to out-do each other, so we ended up with a number of yellow flag incidents before we had our first break for the bikes to come out and practice.

With one qualifying session for the 300 cars and 2 races for the saloons to get through before the lunch break we were again shown some fast racing. The 2½ hour break while the bikes were on track gave us all a chance to relax or walk around the pits to look at the impressive display of Ferrari’s and Lamborghini’s in the paddock area.

The 300 was a rolling start and soon the Ferrari of Claude Giorgio was heading to the front but was given stiff opposition by Peter Rullo in the yellow Monaro and Steve Wyatt on the other 458 Ferrari. A safety car incident bought all but Steve Wyatt into the pits and with a refuelling time delay of 8 minutes, he was able to get a few extra laps in before the others came back out.

Throughout the afternoon the Steve Wyatt/Michele Rugolo made an impressive combination and they came out the eventual winners. Unfortunately Claude Giorgio’s 458 suffered major fire damage and was forced to retire when he was in a good position to claim victory and the long-time leader, the Bordbar/Epple 430 GT3 Ferrari was caught in the pits when the chequered flag fell. It was good to see that there was a real mixture of makes that finished Holden, Ferrari, Porsche and I think there was even a Ford in there somewhere, unfortunately there were also a lot of mechanical retirements, but that’s racing and anyway congratulations to all who took part for a good crowd pulling meeting, bikes and all (yes well done to Adam Senior as I think he won 2 Super Stock and 2 600cc races). 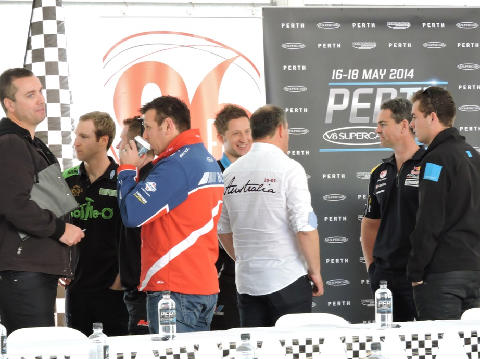