The Nightmasters Race meeting, the first of the season… well, one could only hope that an event that started the week badly could only get better, WRONG.

As an elite organisation we were prep’d and ready to go right on time, early in fact, with plenty of time to get into position, sort our kit, inspect the new debris fencing, switch on radios and Wi-Fi’s, but no, we couldn’t get on track as the karts were still out there!!!! Finally when we did get into position, with the Stewards already starting to do their inspection, there was a another delay while T1 was re-landscaped after someone had gouged out the edge of the sand trap which would have made it extremely dangerous for any Formula Ford or Vee that came off there (which a couple of them ended up doing).

So we get under way with practice and qualifying… DISASTER… what with Mini’s flipping over in T1, Formula Vees loosing major body panels around the circuit and an IPC car forgetting to securely latch the bonnet catches, we all knew that we were in for a very long, hot and eventful day, and no one was disappointed.

The quality of racing in all categories was fast and furious with a few off track excursions; a few major engine failures and close racing. From where I was at FP2 I could hear that nearly all flag points had some sort of incident at or near them but in general the day progressed smoothly apart from recovery delays.

The break couldn’t come soon enough after virtually 7 hours track side with only 1 water run… (could have done with more but this was an unusual meeting!!!)… but it gave us a chance to re-group, re-stock and get back for the night racing.

Optical Illusion, cars go faster at night than they do in the daylight!!!

Being at FP9 I got the headlights as they came over the hill from T6 and then had to wonder if anyone could pull up by T7, nevertheless they were all under control until someone blew their gearbox and T7 got a bit slippery with a couple of V8’s ending up in the sand. The new lights at T6 proved their worth and none of the drivers could complain about being dazzled as the lights are now on the inside of the circuit unlike in the past when they were on the outside… not good if you couldn’t see where you were going in a fast right-hander.

All in all it was a long hot day, tiring but satisfying, with driver’s showing that the season may well prove to be better than ever. Thank you to everyone who turned up and thank you to Gavin Reynolds for your assistance too. 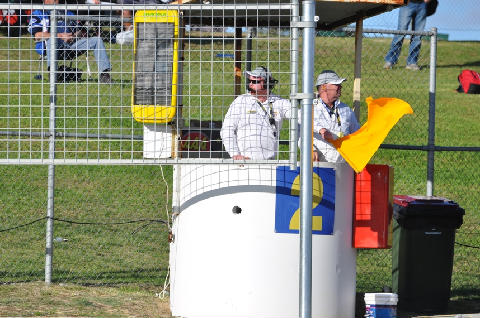