Welcome to our new website! We hope that this layout will give you a better insight into the association and news. We will try to keep you up to date with post event information and upcoming events. Also remember we have a new Facebook page at https://www.facebook.com/WannerooFlagMarshalAssociation

The Spring Race meeting got off to a good start with a majority of our members attending. We now have a greater number of members than we have had for many years, so thank you to new and old, to the drivers who came to help and everybody else. It made life easier with all points having 2 marshals and in some cases 3. We do still have major issues with the light panels obstructing our views and in some points we have to be contortionists to able to see… will it ever change, well I hope so but probably not soon enough.

Qualifying got under way with no delays and saw some fast times put up in all the categories, with a few surprises as some of the usually faster drivers got relegated down the grid.

The Formula Vees as usual were split into a few groups, again one or two of the front runners in past races not getting it all their own way and in the heat of racing there were a few off’s with one spectacular incident in their last afternoon race with a roll over that resulted in the driver going off to Joondalup Hospital, thankfully with no major injuries. Fast work by all officials in freeing him.

The Historic Touring car races were always going to be a battle between Ron Moller and Paul Stuber in their Camaro’s and it was fun to watch Paul drifting round all the corners (with an off at FP3!!) while Ron was more sedate and still within striking distance. Of the rest of the field Steve Hooton had a new motor in the Charger and it was a great improvement over past races, but now he needs new brakes to pull it up!!! Good close racing through the rest of the field especially the Mustangs but as usual great to watch the muscle cars mixing it with Minis and Cortina’s.

The Formula Classics again proved that the older the car doesn’t mean that they can’t go fast, and even tho’ Mike Henderson was dominant there was closer competition further back in the pack.

The saloon cars came out in force with a split grid between the 2 classes with Garry Hills closely pursued by Grant Johnson and Chris Kneafsey battling with Justin Chafey.

The HQ’s didn’t disappoint again, fast paced, close racing with a few paint scrapes (racing incidents!!) and the crowd certainly saw some lead swapping in all of their races.

The IPC boys were back again and the Panizza father and son pair proved that their cars are running well by being front runners in each race. Then there was Ducky, managing to keep his back door closed this time out and having a great dice with Simon Morrison in the Corolla and the other Honda Civic’s. And now we have the Hyundais… 14 to 17 year old lads racing each other as though they have been doing it for years, well I suppose they have really as most have come up from Karting, there are definitely stars of the future among them.

Apart from the one major incident the whole day saw some clean and fast paced races and with the weather being kind (except for the sneaky breeze earlier in the morning) and it was a pleasure to be track side.

Finally, I would like to make an apology to all the Flag Marshals who were there concerning my radio transmission, if I came across as being terse or abrupt I sincerely apologise for the tone. No criticism was intended or even levelled at anyone.

Thank you again to everyone and see you on 31st August for the next race meeting. 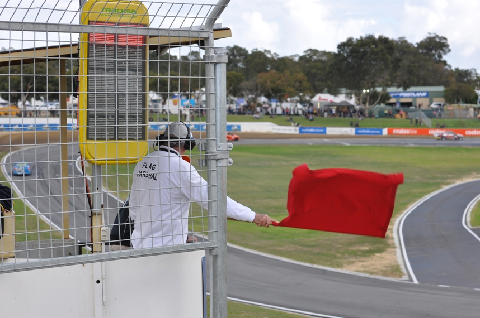