Saturday’s Night Masters meeting promised to be a good day’s racing and I don’t think anyone was disappointed. Weather-wise we would have all been melting if it hadn’t been for the breeze which kept us all cool.

It’s the end of the season and this was reflected with the size of each category being down in numbers but there was still some spirited competition with some clean and determined driving at the front of the Saloon cars between Jason Tremeer and Nick Hanlon with close battles for the other placings. The formula Vee races were (only in my opinion!!) some of the best that I have seen this season, few dramas and close finishing. The HQ’s as usual managed to keep us entertained as they had their Enduro races and it was good to see some co-drivers here from foreign lands (i.e. Eastern States!!) so driving styles were somewhat different between owners and second drivers.

The IPC boys must have felt that it was a long season as a number of cars were missing and a few didn’t manage to still be going at the end of the day, but Matt Cherry in his red beast of a Monaro ran out a clear winner. Ducky, what did you do to your little car as I gather after going well earlier it was retired to the paddock not sounding very healthy!!!!

John Woolaghan’s Ultra came out with the Formula 1000 cars and it’s a pity that their field was so small, again with a number of them not coming out to play as this was an historic first official F1000 race in Australia and we had it here in the West!!!! Unfortunately one blew an engine, another didn’t come back out after the first race so only 3 finished the day, sad really as they go like the clappers and all we can do is hope that next season more owners join in.

The Historic Touring cars gave us and enthusiastic driving display of big muscle cars being hounded by little Minis and a gaggle of Cortina’s mixing it in the middle… mind not all the big boys managed to finish the day in one piece. Likewise the Sports and Marque Sports cars were good to watch.

Even tho’ some of the cars appeared to be going quickly in the daylight, with the lights switched on and Night racing under way the illusion was that they were going a hell of a lot faster. All saloon type categories, including the Ute, livened up the night with glowing disc brakes, intentional drifting and good clean racing, mega spectacular to watch. Congrats to WASCC for the new lighting at Kon’s Corner, I was told later it made a big difference to watching Flaggies and Drivers. So will we see more day/night race meetings next season??? I for one certainly hope so. 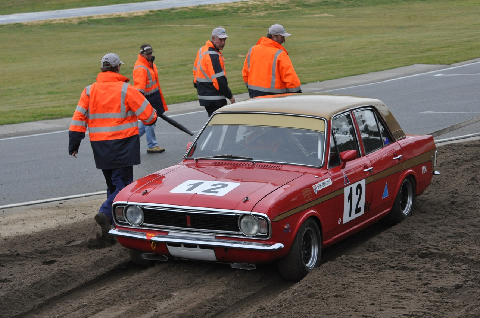