96fm Rocks Perth 2 day Race and Regularity started well on Saturday, we had the numbers, the weather promised to behave apart from the sneaky breeze and we were out in our points before time. Then it all went downhill from there. The timing computer decided to fritz itself and the only way the meeting could get under way was for Raymond Shaw to drop everything and bring in the back-up copy, so stand down everybody, back to the shed and wait. We volunteered to give up our lunch break which was accepted and saved at least an hour plus, and with pit lane pushing cars out the event managed to catch up nearly all the lost time.

Formula Classic was all in the hands of Mike Henderson’s Ralt raced away to lap everyone until an unfortunate incident in race 2 put him out but he was able to get back for race 3 and stormed away to win that one. Historic Touring cars as usual put out a large field and as Paul Stuber’s car was at the Friday tuning day I was hoping to see another exciting Moller/Stuber race but it wasn’t to be and Ron Moller romped around closely followed by a couple of other muscle cars.

Formula 1000 gave a small class demonstration of the close racing that we can expect in the future and the word is that come the September meeting a number of other 1000 driver’s may come over from then East to compete… let’s hope so as in Europe this class attracts large fields with close exciting racing… BRING IT ON AUSSIES!!!

The regularity trials were a chance to sit and relax as they went round as their grids were small and trials short, but still good to see a few Lotii going round “competing” against a TR6.

What can one say about the IPC boys that haven’t been said before, fast, furious and exciting just about covers it. Ducky tried to sneak a new aerodynamic rear wing past he scrutineers with his rear door acting as an aerofoil but some observant Flagging reported him and he got pinged and had to come in and close it. Blamed his daughter for that one… but we know better Ducky!!

Sunday was bright and sunny with a cool breeze and we were joined by a couple of the CAMS Young Officials, Matt Saunders and Seton Douglas-Smith (Colin Chong was with us on Saturday) and they were all very welcome additions to the team… so thanks guys and look forward to seeing you again in the future. Also in the afternoon we were helped by the addition of our 2 newest members Liam and Michelle Simpson both are keen motor sportists (???) albeit Michelle seems to prefer rallying to blacktop… but we can try to change her mind… Dani do you stuff!!

Oh the racing… let’s see the Super GT’s !!!??? Steve Wyatt was back to give an emphatic driving display while being closely hounded by Ron Moller in the big Camaro. Formula Fords as usual gave some good racing with Pete Major having all the success and in the Formula Vees Rod Lisson seemed to manage to stay out front until the last race when he kept swapping the lead right up to and thru the last corner… good stuff all round.

The HQ’s and the Salhoons actually behaved themselves with no argy bargy, maybe they only play up when Tracey is with us, still it’s always entertaining to watch both these categories race and I, for one, hope that they will be around for a few more years to come. And that brings us to the final category… the Street cars!!! Andrew Stevens and Kim Ledger battled it out at the front with honours going Andrew’s way but right down through the rest of the field there was some seriously close racing, well it was the Torque Trophy meeting… but what was wrong with Matt Stiles’s Commodore, it seemed to run a lot slower that when it’s been out before.

Well that was the weekend… we’ve got lots to look forward to in August and September so keep watching our web site for details and info on upcoming events. 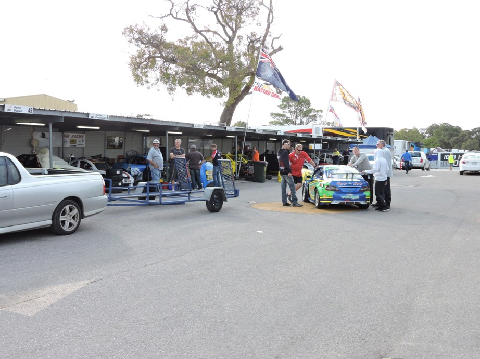