The Winter Classic has come and gone again and I don’t know about anyone else but I reckon that the wind made the day damn cold and I know of a few people who had to delve into the depths of their bags to retrieve their gloves. Well at least it didn’t rain so we probably have that to look forward to on 12th/13th July.

We had a good turnout of members and I would like to welcome 2 new members, Paul Hedington and Ron Vandam, who are both welcome additions to the team. We also had a couple of drivers join us for the day so in spite of some members still not replying to emails, there were no points that were undermanned.

Our Chief-for-the-day was Garry McGraw and as he had to drive up from Gnowangerup and left at some ungodly hour (2am I think he said) he did a sterling job… hope the drive back wasn’t too bad, Garry. There was a certain amount of hilarity when it was announced that the light system wasn’t working and we would have to revert to using just flags… aaah back to the good old days when drivers took notice of what we were doing out there!!!

After practice and qualifying, racing got under way with the Formula Fords doing battle and giving us their usual heart stopping close racing performance. They were quickly followed by the Saloon cars and although we are used to seeing some intense driving from them they managed to behave themselves all day… quite a surprise really. I do wonder what happened to a certain driver of a red saloon car who seemed to have it all sorted out in qualifying and then started at the rear of the pack and had to fight his way forward!! The Formula Vees came out next and as with the FF’s they again demonstrated what fun you can have in one of these cars, close racing throughout the field and plenty of place swapping.

The IPC and Street Cars were put into 2 separate categories as the fields were larger than last time. Yes, there were a few off’s and mechanical failures, but generally they gave us a demonstration of fast clean action and everyone watching these 2 classes would have to have been impressed with their driving skills. It’s good to see Matt Cherry back in his super hot little red machine and he streaked away from the rest, but seemed to have a bit of a problem in one of the races… still finished up the front tho.

After the lunch break it was time to get the Super GT cars on track. In their first race the Ferrari’s certainly didn’t have it all their own way with the Camaro battling at the front until a peeled tyre put the car out, and having to start from the rear of the field in race 2 and coming through to a podium finish shows that this car has been sorted out and is a force to be reckoned with in the future. The V8 Holdens and Fords didn’t disgrace themselves finishing well up the front.

It’s a shame I had to get away early as I gather from some of the comments I have seen, some people didn’t get away for a few hours after racing finished….sounds like a party was going on!!! 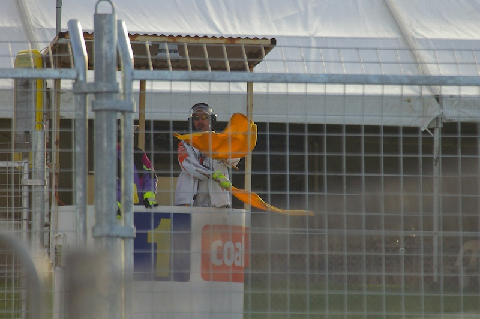