A full weekend of Historic Racing and Regularity events was only spoiled by a bitingly cold wind that was too lazy to go around the small band of dedicated Marshals who were able to turn out, so we all smiled and got on with the job.

Saturday started cold, with a cold track and cold tyres giving some drivers a bit of a problem when it came to turning corners, they preferred to go straight on into the sand!! The IPC boys were out in force and there were some interesting lines during qualifying and even more interesting racing later on. Needless to say with such a wide variety of cars we weren’t ever too sure who was going to come out on top. However they livened up our day when one enthusiast managed to drop a load of oil between FP4 and 5 which resulted in an entertaining 10 minutes as cars spun in all directions. Another spill from FP10 right round to FP1 and beyond didn’t give the clean-up crews much of a lunch break, but the afternoon went better. The Formula Vees managed to field a respectable number of entries and gave some good racing throughout the weekend. In the Formula Classics, Mike Henderson again proved too strong for his opposition while going round in sub-57 second laps, it’s a shame the other Ralt wasn’t able to compete.

Sunday wasn’t much warmer to start with, but we got fed breakfast by the WA Historic Touring Club….so thanks to them. Again our numbers were down, but again we managed. No IPC but they’ll be back at the end of the month. Formula Vee, Historic Sports and Sedans and Formula Classics made up the race program as well as the Historics doing the Regularity runs. It was great to see that the Minis still were able to give the 351 GTs a run, and there were some great battles between Ron Moller and Paul Stubber in their Comaro’s as well as between the Monaro’s and the Falcons.

The weekend was rounded off with the HQ Drivers putting and a very welcome BBQ, together with a couple of ales, topped off an interesting and enjoyable weekend. Sorry if you weren’t able to make it, maybe we’ll see you at the next meeting on 28th July. However a big thank you and welcome to the new members who came and also to the drivers who helped out. 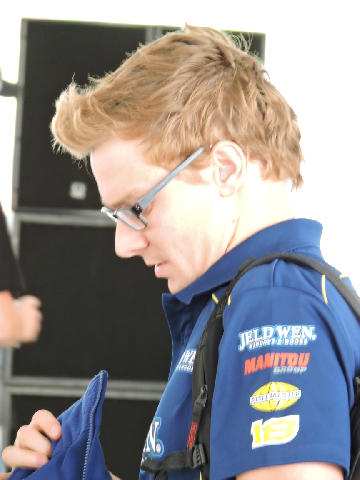